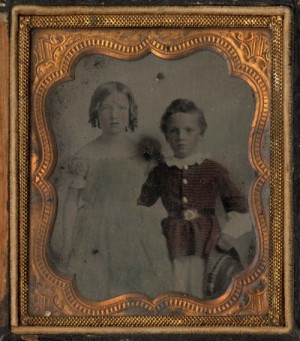 Special Collections houses a number of other non-manuscript collections including watercolor and oil paintings, drawings in both pencil and pen & ink, lithographs, photographs, portraits, maps, and the World War I and II poster collection.

Several collections prominently feature visual representations of the built and natural environment. The Middleton Family artwork consists of measured drawings, ink sketches, pencil drawings, and watercolors. The work of several generations of the Middleton family of South Carolina is represented. A portion of the collection relates to the family seat of Middleton Place, located along the Ashley River near Charleston, South Carolina.

Also included in Special Collections holdings is the incredible collection of eighteenth and nineteenth century ornithological illustrators gathered by John Henry Dick.  The collection contains the complete four volume double elephant folio set of John James Audubon’s Birds of America as well as the double folio and octavo editions of his Viviparous Quadrupeds of North America, all of John Gould’s major titles, lacking only the very scarce Synopsis of the Birds of Australia and Gould’s incomplete final work, Monograph of the  Pittidai (Ant-Thrushes), Richard Sharpe’s Monograph of the Paradiseidae, or Birds of Paradise and Ptilonorhynchidae, or bower-birds, Daniel Giraud Elliot’s A Monograph of the Tetraoninae, or Family of the Grouse, and much more, including the works of Manetti, Buffon, Edwards, Knip, and others.

In addition to being an illustrator and collector of eighteenth and nineteenth century ornithological illustrations, John Henry Dick was also a talented photographer.  Dick’s photographs, taken on his many trips around the world, consist of thousands of images of birds, plants, wildlife, and scenery.

World War I posters include war bond posters, posters from various civic groups advertising the United War Work Campaign, and posters from the Committee on Public Information, the Department of Labor, and the United States Food Administration. The span of this portion of the collection is 1917-1919, with the bulk dating from 1918. The World War II collection is slightly larger and the posters originate from a larger variety of sources as several more government offices became active in poster distribution in the Second World War and, in addition to civic groups, large businesses also distributed war posters. The span covered in these posters is 1940-1945.