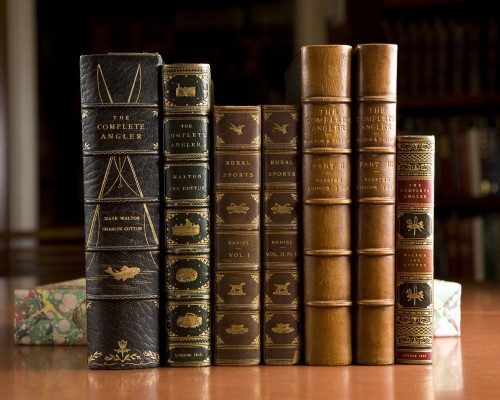 The John Henry Dick Collections
The jewel of the rare books found in Special Collections is the internationally prestigious collection of illustrated 18th and 19th century ornithological works gathered by John Henry Dick and bequeathed to the College. The prize of the collection and the most significant print holding in Special Collections is the complete four volume double elephant folio set of John James Audubon’s The Birds of America. The collection also contains all of John Gould’s major titles, Richard Sharpe’s Monograph of the Paradiseidae, or Birds of Paradise and Ptilonorhynchidae or bower-birds, Daniel Giraud Elliot’s A Monograph of the Tetraoninae, or Family of the Grouse, and much more, including the works of Manetti, Buffon, Edwars, Knip, and others.  In addition to covering ornithology, the collection has a few examples of other natural history illustrators, such as Albert Seba’s Locupletissimi rerum naturalium. . . , Eleazar Albin’s A Natural History of English Insects, as well as the three volume double folio and octavo editions of Audubon’s Viviparous Quadrupeds of North America.

In addition to donating his magnificent library, John Henry Dick also gave an extensive collection of his own work including many watercolors and a large volume of slides and photographs depicting flora and fauna from around the world.

John Mackenzie Library
John Mackenzie, a Goose Creek planter and Charles Towne diplomat, donated his vast library to the Charleston Library Society until the laws debated for the creation of a college were passed. He buttressed his gift with a thousand pound contribution toward building and endowing the College. War broke out in 1776, and a fire consumed Charleston in 1778, burning nearly all the contents of the Library Society; seventy-seven titles of Mackenzie’s library survived – scorched, yet intact – with the elegant gold stamp of his name a reminder of the man who wanted to endow the world with political liberty and freedom of thought.

Izard Library
A complete colonial library once owned by one of the most influential families in South Carolina. Dating to seventeenth century America, the Izard Library, a collection of 394 surviving titles and 867 volumes, is one of the few privately owned, colonial libraries of its size in existence.

Dr. L. A. Frampton Library
In 1853 Dr. Lingard A. Frampton donated his valuable private collection of approximately 4,500 volumes to the college. This substantial donation played an integral part in obtaining the funds to construct a suitable library on campus.

James Warley Miles Library
Miles was an Episcopal priest and a linguist as well as a professor and the first librarian at the College of Charleston. His library is a true scholar’s library containing books on philosophy, religion, and science text in many languages as well as grammar books and dictionaries of such obscurities as Cuneiform, Aramaic, and Flemish. In 1854 a catalog was published offering his scholarly library, but several donors enabled his collections of 606 titles to be kept together and to be added to the College Library.

Juliette Staats Book Arts Collection
Juliette Staats was an expert bookbinder, papermaker, and paper marbler.  Her book arts library was given to Special Collections over a period of years starting in the 1980s. It contains the works by Dard Hunter, John Mason, Isaiah Thomas, and Edith Diehl. The books are primarily about the history of bookbinding and paper making.

Greville Haslam Sporting Book Collection
Compiled by Dr. Greville Haslam, this comprehensive sporting book collection is comprised of angling and hunting books largely published during the 17th through 19th centuries. The collection includes over 400 editions of the same revered title, Isaak Walton’s The Compleat Angler. More details on the Haslam Collection are also available in “The Sport of the Book” an informational brochure created by the Friends of the College of Charleston Library.

Wendell Mitchell Levi Library
A graduate of the College of Charleston (1912) and the University of Chicago Law School, Levi was commissioned First Lieutenant in charge of the Pigeon Section of the United States Army Signal Corps for the Southeastern Department during World War I. Returning to civilian life in his native Sumter, South Carolina, Levi helped establish the Palmetto Pigeon Plant, said to be the world’s largest squab farm. Through a lifetime of devoted effort, Wendell Levi amassed one of the outstanding libraries in the field, covering not only the pigeon, but ornithology, poultry science, genetics, and parasitology as well. In addition to his valuable collection of books and pamphlets, Mr. Levi presented to the College of Charleston his personal papers, correspondence with fellow pigeon fanciers and scientists the world over, and manuscripts of all of his writings.

Gifts of the College of Charleston Friends of the Library
Since 2006, generous gifts from members of our Friends of the Library have enriched our holdings of rare books and manuscripts.  Some of these include Comte de Buffon’s Histoire Naturelle, Générale et Particulière (1749-1804), An Account of the Voyages Undertaken by the Order of His present Majesty for Making Discoveries in the Southern Hemisphere : and successively performed by Commodore Byron, Captain Wallis, Captain Carteret, and Captain Cook, in the Dolphin, the Swallow, and the Endeavour (1773), Lionel Chalmers’ An Account of the Weather and Diseases of South Carolina (1776), Andre Michaux’s Flora boreali-americana (1803), Darwin’s On the Origin of Species (1859), H.C. Everard’s A History of the Royal & Ancient Golf Club, St. Andrews from 1754-1900 (1907), and many more.

World War I Propaganda Pamphlets
The World War I Propaganda Pamphlets include material authored by Woodrow Wilson, Gilbert Murray, H.H. Asquith, Andrew Carnegie, Anthony Hope, Gilbert Parker, Emile Durkheim, Arnold Toynbee, David Lloyd George, Alfred Noyes, Otto Kahn, and James Bryce. Most of the pamphlets were printed in England. Approximately 25% of the pamphlets were printed in the United States and 10% of the collection was printed in Europe.

Thomas Smith Grimke Pamphlet Collection
Special Collections houses a large collection of antebellum pamphlets that were initially part of the library of Thomas Smith Grimke (1786-1834), a prominent Charleston lawyer and South Carolina State Senator. The pamphlets number over 1,000. The collection was donated by Grimke’s fellow Charleston lawyers in 1875. It appears that many of his colleagues added to the collection between the time of Grimke’s death and the donation. The Grimke Pamphlets document the concerns and intellectual life of Charleston during the antebellum period. Grimke’s library reflects his interests in politics, law, free trade, nullification, slavery, religion, education, temperance, and agriculture.

The pamphlets document varying points of view on an issue, in part made possible by Grimke’s purchase of the materials not only from South Carolina but also from other regions and abroad. An investigation of pamphlet imprints in the collection revealed publication from the following locations:
Southern imprints: 45%
Northern imprints: 36%
Washington, D.C. imprints: 8%
Foreign imprints:10%

Pamphlets were a primary means of mass communication during the antebellum period and therefore contain much information that was not accessible in any other format. As a result, these pamphlets are a significant source of valuable information which may be unavailable elsewhere.