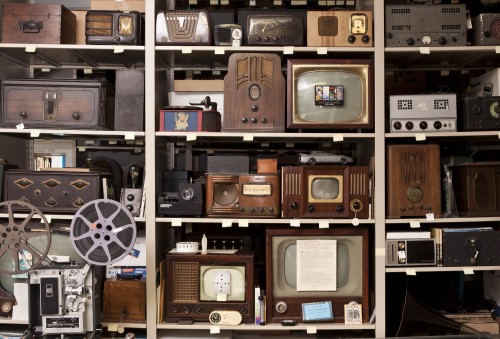 ATTENTION: Public services and hours for the John M. Rivers Communication Museum will be SUSPENDED until further notice.

Previously headquartered at 58 George St. in the historic Elliot House (1803) on the campus of the College of Charleston, the John M. Rivers Communication Museum holds a wonderful collection of antique radios, televisions, phonographs, telephones, magic lanterns, motion picture projectors, and other items related to the history and entertainment of the communications and broadcasting fields.

The John River’s Communication Museum’s collection was formerly housed in the WCSC Broadcast Museum at 80 Alexander Street and was an educational extension of WCSC, Inc. The museum was originally conceived in 1975 by John M. Rivers, Sr. and John M. Rivers, Jr. as an educational repository for original broadcast equipment formerly used by WCSC. It also included artifacts brought from the Seigling Music House, located on King Street, and later incorporated the Hanson Collection. The museum, which was operated by curator Patsy Hicken, closed in 1981 after Ms. Hicken’s death.

The museum then re-opened by appointment only through Gloria Wilson, Vice President and General Manager of WCSC Radio. Then, in 1988, College of Charleston President Harry M. Lightsey, Jr. accepted an endowment from the Rivers family for the establishment of the John Rivers Communications Museum at 58 George Street on the college campus.

Ken Hanson (1912-1999), of Clearwater, Florida, collected the majority of the beautiful display items in our museum. Mr. Hanson began his collection in 1930 while operating a chain of motion picture theaters in central Florida using portable equipment and the new “sound-on-film” movies.

John Rivers, Sr. (1903-1988), after whom our museum was named, spent his life in Charleston, SC, where he enjoyed a distinguished career in broadcasting. From 1938 to 1973 he was president of WCSC, Inc. (“Wonderful Charleston, South Carolina”).

WCSC, which began on May 14, 1930 as an AM radio station, is the oldest broadcast station in Charleston. Since June 19, 1953 it has been the oldest television station in continuous operation in the state of South Carolina.